What is Osteopathic philosophy?

The philosophy behind the distinctive form of Osteopathic medical care

Osteopathic medicine is a distinctive form of medical care founded on the philosophy that all body systems are interrelated and dependent upon one another for good health.

The philosophy of Osteopathy is what sets it apart from other medical disciplines. The key principles are based on all parts of the body functioning together in an integrated manner. If one part of the body is restricted, then the rest of the body must adapt and compensate for this, eventually leading to inflammation, pain, stiffness and other health conditions. When the body is free of restrictions in movement, Osteopathic treatment assists the body with pain minimization, reduced stress and greater mobility providing the body with the opportunity to heal itself.

Osteopathic medicine is a distinctive form of medical care founded on the philosophy that all body systems are interrelated and dependent upon one another for good health. We can identify 4 basic principles:

The Unity Of The Body 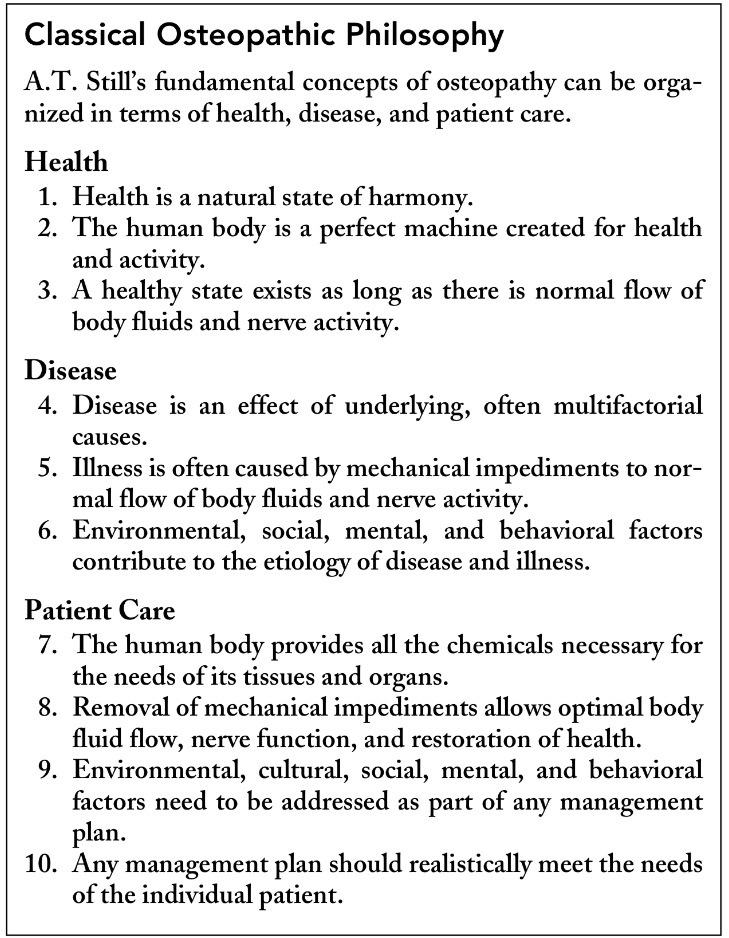 The first of the major principles of osteopathic medicine is that the human body is a unit, an integrated organism in which no part functions independently. This regulation, coordination and integration of the body through multiple biological systems is often referred to as the principle of body unity. According to this principle, abnormalities in the structure or function of one part of the body may unfavorably influence other parts, and eventually, the body as a whole. Thus the body is viewed as an interrelated group of organ systems, each one dependent on the others, and each one compensating along with the others in order to meet the demands of the internal and external environments of the body.

In spite of recent increased interest in holistic approaches to patient care, there is still a common tendency among physicians to isolate illness within a certain organ or system in the body. The osteopathic physician, however, is trained to recognize that when the body is sick, it is sick all over. A specific organ or system may become the prime focus of illness, but the effects of that illness can be felt in some degree throughout the entire body.

The second major principle of osteopathic medicine is that the body has an inherent capacity to maintain its own health and to heal itself. By extension, this principle implies that there must be adequate circulation to and from all tissues of the body, and there must be proper nervous system function in order to coordinate the actions of all of the body’s organs and systems.

Physicians in the mid to late 1800’s understood that the immune system functioned to provide for natural and acquired immunity, to help maintain wellness, to assist in the repair of damaged tissues, and to help the body compensate for irreparable damage. In spite of limited scientific proof at the time, Doctor Still grasped the complex interaction of the nervous, endocrine and immune systems in providing a mechanism for the body to maintain its own health and to self-heal. He saw the duty of the osteopathic physician as one of assisting the body in this endeavor. He understood that the body did not simply exist in a state of health or illness, but was engaged in an ongoing struggle with the demands of its external and internal environments. The body constantly attempts to resist, neutralize or overcome the various stresses to which it is exposed. The degree to which the body is successful in these attempts determines its state of health. If the body can handle stress without excessive demand on itself, then it remains healthy. However, if some discord within the body or a force in the external environment obstructs its adaptability, then disease and illness can occur.

The Relationship Between Structure and Function

The third basic osteopathic principle is that structure and function are interrelated, that the musculoskeletal system can reflect changes in and can produce changes in other body systems. Doctor Still placed great importance on the role of the musculoskeletal system in health and disease. The interrelationship between structure and function is one of the most unique aspects of osteopathic medicine.

Still considered the human body to be a machine. He knew that a machine’s parts had to be assembled in the proper order for the machine to operate effectively. If the machine was not functioning properly, the parts had to be adjusted until it did. Still decided that the human body could work the same way. He saw that the musculoskeletal system (bones, muscles, ligaments and connective tissues) was the largest collective system of the body, making up 60 percent or more of the body’s mass. Through careful study and experimentation, he was able to associate abnormalities in the structural system of the body with signs and symptoms of various diseases. He developed manipulative methods (now known as osteopathic manipulative treatment) to remove these structural abnormalities to alleviate the patient’s illness. These experiences led Still to believe that diseases, as we commonly think of them, were really the result bodily malfunctions, not the cause of them. Often that bodily malfunction was an abnormality in the musculoskeletal system, which decreased the ability of the nervous and/or circulatory systems to function properly. Osteopathic physicians refer to these abnormal areas in the musculoskeletal system as “somatic dysfunctions”, defined as “impaired or altered function of related components of the somatic (body framework) system: skeletal, arthrodial, and myofascial structures, and related vascular, lymphatic, and neural elements.” These are palpable areas, in the spinal muscles, that can be associated with organ diseases as well as common musculoskeletal problems.

A. T. Still’s recognition that the musculoskeletal system has an important role in health and disease was a revolutionary concept. His discovery that the use of manipulative methods could assist the patient in recovering from illness, often with little or no use of drugs or surgery, is one of his most important contributions to the practice of medicine. Using this knowledge of the interrelationship of structure and function, and the techniques of osteopathic manipulation, the DO has knowledge of a unique system of diagnosis and treatment. This approach alone can often assist patients in recovering from illness. At other times, it allows for recovery with little or no medication, and in some cases may help the patient to avoid surgery.

The fourth basic principle of osteopathic medicine is that rational treatment is based upon integration of the first three principles into the total care of the patient. Thus treatment is based on the principles of body unity, self-regulatory and self-healing mechanisms, the somatic component of disease, the interrelationship between structure and function, and the appropriate use of manipulative treatment.