Mai Samih finds out how osteopathy was introduced into Egypt

Before the existence of modern medicine, people would often go to a megabarati, a traditional medical practitioner, to cure ailments such as back and neck pain. Later, there came chiropractors, healthcare professionals focused on the diagnosis and treatment of neuromuscular disorders, and orthopaedists, specialists in correcting deformities of the skeletal system.

Physiotherapists also help people with disabilities recover since they have special training in helping patients with exercise, physical rehabilitation, and therapeutic methods of treating the musculoskeletal system.

However, recently a new form of medical practice has been introduced into Egypt, although it is already well known abroad, in the shape of osteopathy. Egyptian osteopath Hesham Khalil gave more details about this modern approach to physical health and how he became acquainted with it.

“In the early 1990s I was living and working as a physiotherapist in the United States. Unfortunately, I had several car accidents after which I developed what is called a cluster headache, a severe headache causing severe pain in the head and neck and limiting the ability to see, hear, and move. I went through every possible medical diagnosis in the US, and all of them proved that I was fine and had no good reason to have this pain. But by that point I was on five types of medicine, and the headache was progressive and disabling,” Khalil said.

“One of my friends then contacted me advising osteopathy. I did not know what it was, so I decided to visit an osteopath for treatment. After just three sessions I was finally cured after five years of suffering. Afterwards I was interested to study osteopathy, as I had to stop and think about how this could happen.” It was this personal experience that caused Khalil to study and later practice osteopathy. 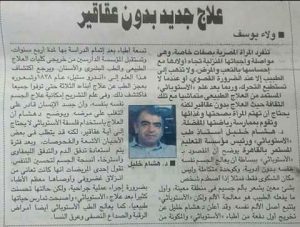 Dr. Hesham Khalil with Dr. Eman Sanad – What is Osteopathy?

Meeting a person like Dr/Hesham Khalil give us a chance to learn that : Despite your success and your knowledge , you should be a modest person and not ju

st in treating others decently but also in supporting their new ideas. Great thanks for Dr/hesham Khalil from Lupdup team for this interview , his incorporeal support and also for accepting our idea *lup dup magazine.

How did you learn about osteopathy in the first place?
There are many instances in which personal traumas/ experiences are known to shift ones paradigm, or scope and make a lasting impression and perhaps teach a major life lesson, or end up blessing someone’s life. For me, one of my personal experiences; I have several car Accidents in which I developed what so called culstural Headache where No Medical Model has relieved my Pain for a full Five Years Using the Best Medications and Narcotics. Until one day everything changed; an Osteopathic Doctor in Canada Was Able to Cure me totally only within 3 Visits within a very Short Time without Use
of any Medication and By Correcting the Bio-mechanics of my Neck and Dorsal Area, resulting in me not having the headaches anymore.

How did osteopathy enter Egypt?
Alhamdulillah, all praise due to Allah; He gave me the opportunity to Introduce Osteopathy to North Africa and the Middle East area and for the first time in 2006 During the International Physical therapy conference.

Most people think osteopathy is mostly about treating the fascia and fascial release techniques?
Why is this picture in people’s heads?
It is purely my Mistake, When I started Promoting Osteopathic Philosophy nearly 12 years ago as well as the concept in Practice .. I focused on something Related to Muscl-Skeletal System to Simplify the Idea. But Sadly, first impressions last. But in reality
Osteopathy Treats everything with a certain approach.

New Turn in Promoting Osteopathy to Gulf Area,(Global Osteopathic Approach for Physical therapist at King Faisal Hospital and research Center – Jeddah November 1-5, 2015.) as well as a Grand Round Presentation for physicians, Nurses,Therapist and Hospital management on November 5th.

Dr.Hesham khalil said: It is such a great pleasure to teach such talented, interactive and brilliant a multinational group of physical therapist (from Saudi Arabia, Europeans, Egyptians, Jordanians, Syrian, and lebanese ).  The Great thanks goes to my wonderful brother Dr. Waleed Bakallah for his incredible efforts a brilliant organizational skills to make this course/ workshop one of my best worldwide. A lot of thanks Dr. Khaled, Dr. Esraa, for the great support.
I do feel my dream of getting a Legitimate Osteopathic education into Every Middle Eastern and Northern African Country is coming to reality. Thank God for having Such a Wonderful team in every Country , Special thanks to my OsteoEgypt team for making this efforts Possible

OsteoEgypt news in the Middle east